As usually, it has been way too long since my last update.  As usual, I have a post all typed up and ready to go that I never posted. As usual, more has happened since the unposted update and I need to change my update.  Given the amount needed to cover and the ongoing status of some items, I will try to resist the mile long post that may result and cover it one item at a time.

Logan recently went in for another MRI.  This MRI marked the 6 month mark from being off chemo. To me, this would be the true test of whether or not he would be able to stay off chemo.  We were waiting for this MRI to decide if we would have his port removed so it was kind of a big deal. 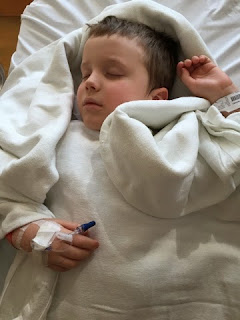 Logan did great, as usual, during the MRI day.  I actually had to wait to tell him about it until the day of, not because he would be scared, but because he would be so happy to be going to the doctor that he would drive me crazy!  I would hear about once an hour, "is it time to go to the doctor yet?!?"  You can imagine after a couple of days of this, one learns to withhold this information until it is absolutely necessary.

A week later, we finally got to sit down with his doctors to review the MRI and talk about next steps. A week that feels like a year!  The good news is that the tumors of concern, the ones Logan was on chemo for, are still stable.  They have not grown or changed in the 6 months that he has been off chemo.  The bad news is there is a new area of concern.  (In true Logan fashion, stable MRI but new concern)

To better understand the situation let me explain a few things about brain tumors and MRIs as it relates to Logan. Keep in mind, I am no expert, so I may not be the best reporter. Though I have probably learned more from being a parent of a brain tumor kid than I had in my semesters of neuro anatomy in college and grad school. Logan's past MRIs have revealed 2 different kinds of "spots".  First there are the tumors.  These are the areas that have mass and have have grown over time.  These areas, however big or small, actually take up space in his brain.  This mass is the reason that Logan had to go on chemo.  As the tumors grew, they interfered with the functioning of his brain putting him at risk for many issues.

The other spots on his MRIs and are little more confusing.  Sometimes they are called "UBO" (unidentified bright objects), sometimes called lesions, sometimes called hyper-intensity.  Whatever you call them, there isn't much to them, which is good because Logan has a lot of them.  These "spots" are often found in brains that have incurred some kind of damage (ex, stroke, dementia, etc.) but they are also very common in NF and have been known to come and go on their own without causing any discernible effect.  They have no mass but for whatever reason show up on an MRI as little bright areas.

Back to Logan's MRI. One of these hyper-intense spots from Logan's previous MRIs appears to be materializing into an actual tumor.  It is going from being a "nothing spot" to obtaining mass and growing.  At this point the size of the tumor is still very small and should not be impairing any functioning.   His doctors think there is a good chance that this tumor may go away on its own.  There is an equally good chance that it will continue to grow.  Should this tumor grow considerably, we would need to discuss intervention again. After speaking with Logan's neuro-oncologist today, we got a sneak-peek of what that might entail.  For this kind of tumor, chemo is not the necessarily the recommended course, unless his other tumors also being to grow back.  If this is the only tumor of concern, they would likely recommend surgery to remove it.

For now, it's on to waiting for another 3 month MRI to see what this tumor decides to do (along with the other tumors).  The port will stay in another 3 month, as getting monthly port flushes are far less invasive than removing the port and having to put it back in, should we need it.  Thankfully, we have plenty of other issues to keep us busy for the next 3 months, but that is another post for another day.